Basically the mirror image of any image for 2D reflection is generated with respect to the “Axis of Reflection”. For that we need to rotate main object 180 Degrees about the reflection axis.

Following figures are shown for better understanding of Computer Graphics Reflection.In the above figure, it shows the half of the above image is reflected with respected to the X-axis. So there we may choose axis of reflection in the XY plane. One must remember that, when the reflection axis is a line in the XY plane, say X-axis, the rotation path about this X-axis is in a plane which is perpendicular to the XY plane. So Image gets reflected with respect to any axis say X-axis or Y-axis. Generally the image is original plane is represented with the points say 1,2,3, where as the reflected image is denoted with the same numbers with dashes say 1’,2’,3’ and likewise.

Transformation in Computer Graphics Reflection is broadly classified in to Two Categories. They are,

When Image gets flipped across, then the Image reflection is known as Horizontal Reflection. And here image gets reflected with respect to the Y-axis. Generally Reflection about any line in Computer Graphics is represented by any line,

The line y = mx + b, can be achieved with a combination of translate-rotate-reflect transformation. In this several transformations Translation, Rotation and Reflection took place. For Instance, consider a line, so what do we do first? Yes first we translate the image, so that it generally moves towards one of its side from origin point. So then we rotate the same object to one of the coordinate axes and reflect it about that axis. Now we restore the object to its actual position with the inverse rotation and translation. 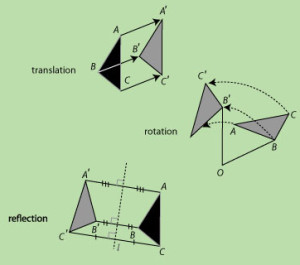 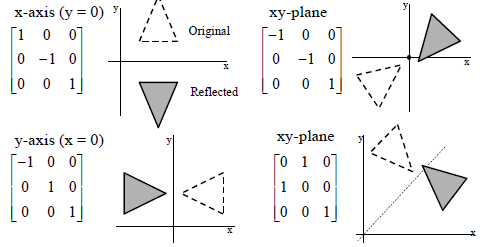 Morphing (Metamorphosis) ,Its Techniques and Applications